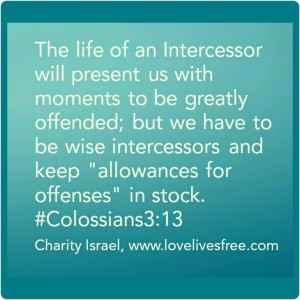 Forgiveness is one of the greatest jewels of the Christian faith. It is what God graciously extends to us through Jesus Christ, and it our Christian response to others. Intercession is also a jewel. God in his kindness was often times willing to forgive a nation because of the prayers of one person (Exo. 32:32, 34:7-9; Deut. 21:8; Ps 79:9; Isa 2:9; Dan. 9:19; Amos 7:2) Throughout the ages, people have selflessly stood in the gap for those who had no desire to please God. They have been a saving grace to our human race, and all their prayers are appreciated.
In the Old Testament, we find that those being persecuted by pagan nations often prayed for the destruction of their enemies. They did not just pray for their destruction, but they fought many battles to ensure it. In the New Testament, however, there is a new response to those being persecuted by their enemies; and that is praying that they are forgiven. Many of us would not consider forgiveness as a form of intercession. We do not consider it intercession because we often focus on the offense instead of the proper response to it. We often let the hurt fester, and we adopt it as a new chip on our shoulder to stay angry at the world. It is the bitterness from unforgiven offenses that operates as a toxin in the Body of Christ (Heb. 12:14, 15). In the New Testament, we discover the proper response of an Intercessor when the offense becomes a physical attack instead of a spiritual one. We must forgive, and that forgiveness becomes an intercession for those who attack us.
There is leader in the Bible who used forgiveness as a form of intercession. This man led a small core group of 12; fed over 5,000 people with two fish and five loaves of bread; and he gave up his life so that everyone would have an opportunity to know God. This man is named Jesus. It was Jesus who spent his life exemplifying what it meant to love God and your neighbor only to be, at the end of it, wrongfully accused and sentenced to death. It was Jesus, who while visiting one city, heard the crowd shouting “Hosanna, Hosanna!” one week and chanting “crucify him!” the following week. It was Jesus, the one who healed the withered hand and crippled feet, who had to have his hands and feet secured to a cross by nails. It was Jesus, the one possessing eternal life, with his last breath uttered these words in Luke 23:34, “Father forgive them for they don’t know what they are doing.” Jesus who had every right to be upset, offended, furious, and betrayed made his last words an intercession. I would assert that if Jesus was praying “Father forgive them,” that he had already forgiven them (us) in his heart. He made an “allowance for our offenses” as Paul admonishes each believer to do in Colossians 3:13, “Make allowance for each other’s faults, and forgive anyone who offends you. Remember, the Lord forgave you, so you must forgive others.” Jesus showed us by example how we should respond to those who would love nothing more than to see us dead, FORGIVE THEM.
In the book of Acts chapter 6 and 7, we find the story of a man named Stephen. The bible described him as “a man full of faith, the Holy Spirit, grace, and the power of God. He performed amazing miracles and signs among the people.” (Acts 6:5, 8) He was loved by the brethren and hated by religious leaders because of his wisdom and the Holy Spirit in him. These men conspired against him and found people to lie on him. Their lies led to Stephen’s arrest and a meeting with the Council (vv. 6:9-7:53). It was during this meeting that he spoke only what the Spirit told him to say. His words of truth made those living a lie furious. Out of their anger, they drugged him outside of the city and began to stone him (vv. 7:54-58) This man who was obedient to what the Holy Spirit asked of him was now facing death by the hands of those claiming to know God. His response to their actions was a prayer. Acts 7:59, 60 says, “As they stoned him, Stephen prayed, “Lord Jesus, receive my spirit.” 60 He fell to his knees, shouting, “Lord don’t charge them with this sin!” And with that, he died.” Stephen like Jesus interceded on behalf of his murderers so that their sins would not be counted against them.
As intercessors it is important that we are found, even in the face of death, interceding for our offenders. It should be the desire of every intercessor that all come to know God, including those who hurt us. The story of Jesus and Stephen proves that we can be completely in the will of God and have to suffer persecution. They show us that the very people we are called to help may bring us the greatest harm; but we must forgive them. In our humanity, holding an offense will always be justified, but our call to “live according to the Spirit” nullifies that human right (Rom. 8:5). The life of an intercessor will present us with moments to be greatly offended; but we have to be wise intercessors and keep “allowances for offenses” in stock. The enemy would love nothing more than to hold you hostage, from you assignment, by the offenses you refuse to let go. Effective intercessions are those wrapped in love, grace, and forgiveness. Reinhold Niebuhr says “Forgiveness is the final form of love.” It is my prayer that if any of us are found having to surrender our life for this great Gospel that our last prayer would be, “Father forgive them!”