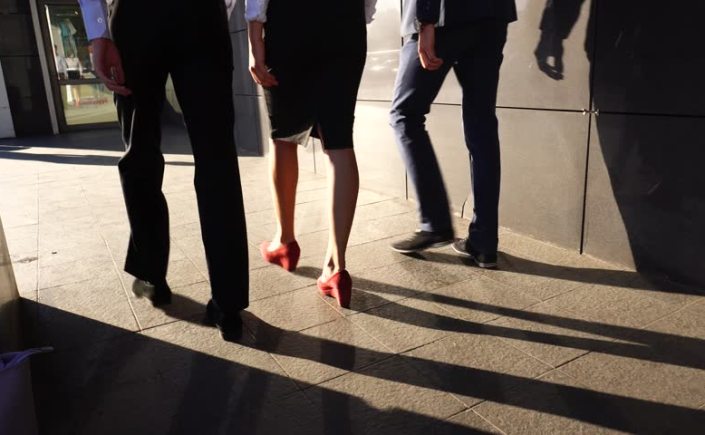 As I was laying in my bed fighting the fact that I was awake, my stepfather came to mind. I begin to think about all the broken promises He made to my family. He used to tell us we were going to Disneyland, Hawaii, and etc. He promised us extravagant gifts, and he never delivered on them. As you get older you start to realize that he’s a liar, and you will never see the things he promises. Completely unbeknownst to me, my stepfather was creating my image of men. His empty words created a mistrust in me towards men. My stepfather’s actions coupled with my biological father’s decision to be missing in action was a perfect concoction for trust issues in future relationships. By age five, all I had come to know about men is  they will lie to you or abandon you. That was my perception based on my experience with them.
I remember my first heartbreak came in the fifth grade. I was dating this guy named Gary. I went away for a special school trip. When I returned it was rumored that he and Tara, a fully developed and sexually advanced fifth grader, were doing some things in the bushes. Those activities led to them being in a relationship and me being dumped without my knowledge. When I confronted Gary, he lied and denied everything. Once we were all at recess their actions told another story. I remember running to the bathroom and weeping alone. I had never felt such humiliation and betrayal from any other male than my fathers. This experience watered those seeds of distrust and abandonment. Distrust mutated into mistrust, and I became suspicious of every man that entered my life.
After Gary, I seemed to attract guys who were either bankrupt of love or felt they had too much loving to give. Many of my short-lived relationships consisted of me trying to convince a guy they were worthy of my love, or convincing myself that cheating was okay because I wasn’t having sex with them. From jr.high to high school, mistrust and abandonment were blossoming into glorious Weeping Willows without my permission.
In college, I changed up my dating strategy. Throughout college my dating relationships were long distance. In retrospect, I believe I did this to avoid another Gary and Tara situation on campus. I found these relationships to be easier on my heart. I didn’t have to overlook stuff, question them, and etc. I was completely committed to them, and those relationships brought about some of my fondest memories of being in a relationship. However, those relationships came to a sad ending due to fear. By the time a man was seriously interested in loving me, my insecurities wouldn’t allow me to receive it. So I ran like Usain Bolt!
My last relationship was the most devastating of them all. It was the one I gave 100% percent of me. It was the one I shared every truth I knew about myself. It was the one I made a conscious effort to ignore the Weeping Willows in my heart. It was the one that I went shopping for a wedding dress. We looked at rings, venues, and honeymoon destinations. It was the one I gave my virginity to because I just knew forever would be how long we would spend together. However, life happens and you end up back alone.

Fast forward to today, I am 32 and single. Well actually I’m not. Mistrust and Abandonment have been my most intimate companions for some time now. They have been constant friends reminding me that men cannot be trusted; one will never truly love you; and when you choose to love them they will abandon you. Their lies have become my truth, and they have painted my perception of men and my relationship with them.

Today, I felt a strong unction to simply forgive my stepfather for every lie and unkept promise. I will no longer allow those things to rent space in my heart and mind. I also release my biological father from the expectations I had for him as a father. His purpose was served by getting me here; and I’ll be forever grateful to him for getting that part right. I release every toxic and dysfunctional relationship that has tainted my perception of real love. I forgive myself for allowing my insecurities to sabotage past relationships, and today I pray that the Weeping Willows, abandonment and mistrust, be cursed at their roots never to live again. I renounce my allegiance to their ideologies, and I choose to believe “Good men who value the integrity of their word do exist.” Last but not least, to those who I hurt by allowing my perception of men to get in the way of what you were trying to show me please forgive me. I truly did not mean you any harm; and I hate that what I did in the name of protecting me harmed you.
Thanks for reading!-Charity Israel 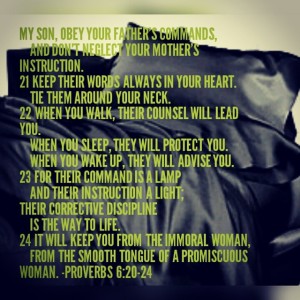 Today as I read Proverbs 6,  I started to think about the countless men who have fallen for the women of their lustful desires. Throughout the passage, Solomon is imploring his son to stay away from three types of women: the immoral (Proverbs 6:24), the promiscuous/prostitute (Proverbs 6:24, 26), and the adulteress (Proverbs 6:26). As I read I felt the need to echo the author and here are my reasons why:

Solomon loved many foreign women. Besides the daughter of the king of Egypt he married Hittite women and women from Moab, Ammon, Edom, and Sidon. 2 He married them even though the Lord had commanded the Israelites not to intermarry with these people, because they would cause the Israelites to give their loyalty to other gods. 3 Solomon married seven hundred princesses and also had three hundred concubines. They made him turn away from God, 4 and by the time he was old they had led him into the worship of foreign gods. He was not faithful to the Lord his God, as his father David had been…9-10 Even though the Lord, the God of Israel, had appeared to Solomon twice and had commanded him not to worship foreign gods, Solomon did not obey the Lord but turned away from him. So the Lord was angry with Solomon 11 and said to him, “Because you have deliberately broken your covenant with me and disobeyed my commands, I promise that I will take the kingdom away from you and give it to one of your officials.

The wisest man on earth died as an apostate and disgraced his Godly heritage in pursuit of loving his women and appeasing their gods. Both Samson and Solomon lost their way because they opted to ignore the advice of Proverbs 6:20-23. By refusing to adhere  to the advice of their parents to stay away from certain women, one lost his strength and the other left God.

2.   The prostitute or the promiscuous woman will provide you pleasure, but she will destroy your pockets (Proverbs 6:26). She will ensure you have a good time, and make you pay more than what you bargained for. The story of Tamar and Judah is a prime example of how a “prostitute” can take all you have and bring you to shame (Genesis 38). Here Tamar disguised herself as a shrine prostitute in order to have a son and ensure she obtained the inheritance that was hers by marrying Judah’s eldest son. Judah slept with her assuming a goat will be all that was required, and by the end of the story his reputation was the real wage he paid. Loving prostitutes will leave you destitute.

3.   Sleeping with another man’s wife will cost you your life,” is the warning the writer gives his son in Proverbs 6:26. This death can be in many areas of a man’s life, just ask David (2 Samuel 11). I do not desire to call Bathsheba an adulterer in the traditional sense of willingly seducing a man, but the fact is she was married when David slept with her. As a result of attempting to cover up his sin, David orders Bathsheba’s husband to be killed in battle. He is confronted by the prophet, and God pronounces judgment concerning the matter in 2 Samuel 12:11-13, “This is what the Lord says: Because of what you have done, I will cause your own household to rebel against you. I will give your wives to another man before your very eyes, and he will go to bed with them in public view. 12 You did it secretly, but I will make this happen to you openly in the sight of all Israel.” David’s decision to sleep with another man’s wife cost him his newborn son and brought a curse of discord between him and his other children (Read 2 Samuel). David did not die physically, but he was spiritually bankrupt (Psalms 51) and he loss his family life. The same will occur to anyone who lays his head in the bed of a married woman.

The Point: I hope you consider this as a warning and way to save yourself from ruin. There will be many of those type of women grabbing for your attention, but you must not get caught in the moment. Even the author of Proverbs forsook his own advice and ended his life is the worst way possible, away from God. Samson’s life glorified God in the end; but I wonder how many victories did he forfeit by being entangled in the arms of an immoral woman. Judah, a well respected man, lack of integrity was exposed before all the people of the town because of sleeping with someone he thought was a prostitute. David too remain close to God after his moment of weakness, but his kingdom nor his family was never the same because of it. Men you have an opportunity to make a decision today to resist the woman that will cost you more than you can afford. They are not worth your gifts, money, ministry, family, or ultimately your life. My prayer is that with every temptation they present you would resist it. I pray you will be a man of honor, integrity, and self-control. I pray that in those moments when her pull appears strong that you would flee both fornication and conversation with her. I know it’s not easy, but it will be worth it. Your future depends on it. I’m praying for you!-Charity Israel

With Christmas being less than one day away, I figured the perfect gift to give the Social Media world would be a nice list on How to Survive Christmas with Family. I cannot promise this list will provide Peace to all mankind, but I personally find it hilarious:

I hope these tips will help you enjoy your time with family tomorrow. Jesus is truly the reason for the season, MERRY CHRISTMAS!!!- Charity Israel